This is the second round of my British Comedy quiz focusing on Panel Shows. British comedy has a multitude of panel shows to choose from, but for simplicity I kept it relatively simple and stuck to the most popular ones. (Or at least the most popular ones from the clientele of the pub) See how well you do. Just like last time, hover over the blanked out bits for the answers.

Question 1: QI was originally hosted by Stephen Fry, before being replaced by Sandi Toksvig in 2016, but what does QI stand for
Quite Interesting

Question 2: Which Panel Show first broadcast in 2005 has a name taken from a well known advertising tagline?
8 Out of 10 Cats (Whiskas cat food claim that 8 of out 10 cats prefer Whiskas)

Question 3: Which Panel Show is hosted by Jimmy Carr and is usualy broadcast in the last week of the year or the first week of the new year?
The Big Fat Quiz of the Year

Question 4: Who was the original host of the radio comedy show where contestants must speak on a given subject for 60 seconds without hesitation, repetition, or deviation?
Nicholas Parsons (Just a Minute)

Question 5: Frank Skinner hosts a show where guests can banish their top peeve, annoyance, irritation or worst nightmare, but who wrote the novel the show took its name from?
George Orwell (Nineteen Eighty-Four is the book referenced by the show) (Room 101 is the name of the show)

Sorry, again no sources for this round. But I’m sure Google can help you out! 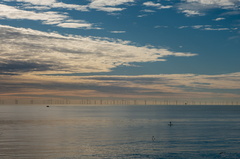 A view looking at the English Channel off of Brighton shows some ubiquitious things which are associated with the Sussex Coast. Out on the horizon is the Rampion Wind Farm, closer in is a small pleasure boat, then a paddleboarder is making their way around the pier. Closer in still is a lobster pot and then a seagull flying along the water.