For this round I decided to go for a slightly different round to see how it went. I plumped for a fill in the blanks round to let people’s imagination run wild. In my experience whenever a team has no idea what the answer is, not even a vague one, they will put the most ridiculous answer down just to entertain themselves. So I decided to use this to see what the most ridiculous answers were I could get out of the teams, I was pleasantly surprised with the varieties in the answers! As I said this round was fill in the blanks, but I went for a particular theme. Prince Philip. I thought that his quotes would fit very well in a British Comedy quiz, and I was validated when it got a lot of laughs!

Question 1: On finding out that Cate Blanchett was in the film Industry, what did Prince Philip ask her to fix in 2008?
His DVD Player

Question 2: At A Dinner Party in 2004 he opened the meal with this phrase; “Bugger the table plan, give me *Blank*!”
*My Dinner*

Question 3: In 2000 he said “People think there’s a rigid class system here, but dukes have even been known to marry chorus girls. Some have even married *Blank*!”
*Americans*, It was only when I was reading out the answers when I realised that one of our Locals had brought his American wife along to the quiz that night. Fortunately she saw the funny side!

Question 4: At a visit to Salford in 2001, 13 year old Andrew Adams told Prince Philip he wanted to go to space. Prince Philip’s reply was “You’re too *Blank* to be an Astronaut.”
*Fat*

Question 5: In 1998 he met a British Backpacker who had trekked through Papua New Guinea and said “You managed not to get *Blank* then?”
Eaten

Sorry, I didn’t make a note of my sources for this. A quick search shows that lots, and lots of newspapers reported on these quotes though! 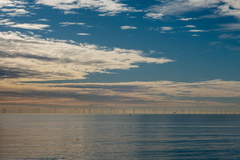 The Rampion Wind Farm sits off of the Sussex Coast just south of Brighton. This view on a calm day shows the wind farm with clouds drifiting overhead.