We always used to end quiz nights with a snowball round, it’s a simple premise. Everyone pays £1 to enter and enters individually rather than as a team. The quiz consists of 6 questions which get progressively harder as we go along. As soon as you get an answer wrong, you’re out. Whoever is left at the end wins the whole pot. That doesn’t happen often and the pot rolls over from week to week, hence the name.

As it takes place at the end of the evening, some of us need a little help so traditionally the first answer is always D, the second answer is almost always D. Good Luck!

Question 1: According to Wikipedia, how many islands are there in the River Thames between Oxford and the North Sea inclusive? Answer: D, 122
Question 2: The Isle of Wight hosts many events, but none are as well known as Cowes Week, which is one of the longest running regular regattas in the world, but in which year did it start? Answer: D, 1826
Question 3: Which poet wrote in 1624 that “no man is an island, entire of itself”? Answer: B, John Donne
Question 4: The Island Games are an international mini Olympics for island communities, where were the XVIII Island Games held in 2019? Answer: D, Gibraltar
Question 5: Love Island is a British dating reality series broadcast on ITV2, contestants are locked in a villa where they have to ‘Couple Up’ and anyone left single is eliminated. The location of the villa is located on which island? Answer: C, Mallorca, Spain
Question 6: Bergerac is a British television series set on the island of Jersey, it stars John Nettles as the title character Jim Bergerac. Many well known actors had minor roles in Bergerac before rising to fame, but which of the following did not appear in Bergerac? Answer: D, Chris Barrie 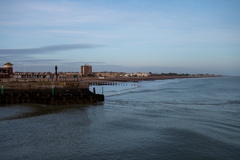 The breakwater at the mouth of the River Arun. Taken from the West Beach looking east.