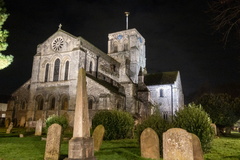 A night time shot of St Mary de Haura Church, which sits at the centre of Shoreham-by-Sea. The Grade 1 listed church dates from the 11th Century and incorporates elemts of late Norman and early Gothic architecture.