Quite honestly, this is not the best round I ever wrote, I had an idea to take my Prince Philip fill in the blanks questions and modify it for politicians. On a side note, politics really should be kept away from pub quizzes in general, its fine to ask who was prime minister on a date, or who came before or after, but don’t go much further into politics because it will get messy. Because I wrote this in a hurry I didn’t read through it as well as I could have and so I have ended up with a fairly easy round as there are only certain things which can go in certain gaps. It may work better at the end of your quiz perhaps, but I wouldn’t recommend using it, treat this as an example of what not to do!

Question 1: At a Press Conference in April 2003 how did Tony Blair end the following statement “Before people crow about the absence of Weapons of Mass Destruction, I suggest they *Blank*.”?


Question 2: In her speech declaring her bid to become leader of the Conservative Party in 2016 Teresa May said; “You can judge me by my *Blank*!”


Question 3: During the 2005 General Election Boris Johnson went onto BBC Radio 4’s Desert Island Discs and said “Voting Tory will cause your wife to have bigger breasts and increase your chances of owning a *Blank*!”


Question 4: Gordon Brown was famously caught on microphone complaining to an aide after meeting Labour Voter Gillian Duffy in 2010, how did he describe her?


Question 5: After Boris Johnson assumed the post of Prime Minister in 2019 Caroline Lucas went on Twitter and said “At a moment when we need a leader with courage and integrity, we get a *Blank*”

Here are the bits to fill in the gaps with 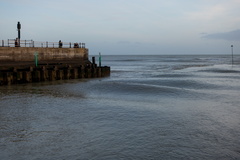