This is the longest round in the quick quiz I put together, and perhaps it shouldn’t have gone into a quick quiz as it caused a lot of discussions in the teams and overall it took the same time as a couple of rounds. I called it a Points Builder round, as every question has a lot of answers to help the teams collect as many points as possible.

Unlike my Inflation rounds where the teams know how many answers there are I left it ambiguous in this round which did lead to some teams wildly overestimating the number of answers available. You might want to add a rule to take points away for more answers, I didn’t bother as it was a friendly quiz. Without any further ado, good luck!

Question 1: Name all the European Countries (not dependencies) with a cross on its flag.
Iceland, Norway, Finland, Sweden, Denmark, United Kingdom, Switzerland, Malta, Greece, Georgia, Slovakia, Serbia (you could also include Vatican city as it has keys crossed on it’s flag, depending on how generous you are feeling)

I don’t have any sources for the answers on this one, but for the last one I’m sure I used the National Rail Enquiries website which had a table somewhere with the stations listed. 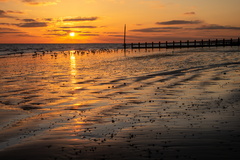 The Sun sets into the sea off of Rustington Beach in West Sussex. The Sun is reflected in the wet sand of the beach leaving a path leading the eye up to the sun..