Today I thought I might as well start posting the quizzes I intended to post to this blog when I restarted everything. So today here is the first of my Quarantine Quizzes. Me and my pub quiz team were all in the pub at a quiz when lockdown was first announced in 2020, we decided that we needed an excuse to socialise and stay sane during the coming weeks so we arranged a Monday night online quiz replacement. It took us a few weeks to settle on a format, but eventually we settled on 4 rounds of 5 questions each, that gave us 32 rounds each week to have fun with which ended up being a good replacement for our usual quiz.

This first quiz was definitely less polished than later quizzes ended up being, as we did throw things together rather haphazardly. I know I have said this before, but this is definitely not the best quiz I’ve ever written. Have a go for yourself though, this is round 1 on Geography….ish.

Question 1: As Eurovision is not taking place this year which country, formerly a winner (2003), no longer participates in the event officially because they are dissatisfied with the rules, but unofficially because it is too gay?
Turkey (First Entry 1975, last 2012)

Question 2: The Trans-Siberian Railway was built between 1891 and 1916 and has a length of 9,289 kilometres (5,772 miles), it spans a record eight time zones but what are the two cities it terminates in?
Moscow and Vladivostok

Question 3: What is Britain’s most popular road name?
High Street

Question 4: Apart from Headingley in Leeds and Old Trafford in Manchester, which other northern cricket ground has hosted Test Matches in recent years?br> The Riverside Stadium in Durham

Question 5: What lies between Trafalgar Square and Leicester Square on a standard London Monopoly Board?
Fenchurch Street Station

I didn’t have any sources listed for this, I took inspiration from a few quiz books I was working through at the time. When I dig the books out again next, I will update this post. 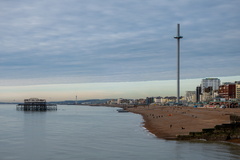 Brighton beach is quiet during the Winter season with no tourists in sight. The sea ripples underneath the derelict west pier and the i360 tourist attraction is moving up it's stick to give those inside a view.