Today I thought I might as well start posting the quizzes I intended to post to this blog when I restarted everything. So today here is the first of my Quarantine Quizzes. Me and my pub quiz team were all in the pub at a quiz when lockdown was first announced in 2020, we decided that we needed an excuse to socialise and stay sane during the coming weeks so we arranged a Monday night online quiz replacement. It took us a few weeks to settle on a format, but eventually we settled on 4 rounds of 5 questions each, that gave us 32 rounds each week to have fun with which ended up being a good replacement for our usual quiz.

This first quiz was definitely less polished than later quizzes ended up being, as we did throw things together rather haphazardly. I know I have said this before, but this is definitely not the best quiz I’ve ever written. Have a go for yourself though, this is round 1 on Geography….ish.

Question 1: As Eurovision is not taking place this year which country, formerly a winner (2003), no longer participates in the event officially because they are dissatisfied with the rules, but unofficially because it is too gay?
Turkey (First Entry 1975, last 2012)

Question 2: The Trans-Siberian Railway was built between 1891 and 1916 and has a length of 9,289 kilometres (5,772 miles), it spans a record eight time zones but what are the two cities it terminates in?
Moscow and Vladivostok

Question 3: What is Britain’s most popular road name?
High Street

Question 4: Apart from Headingley in Leeds and Old Trafford in Manchester, which other northern cricket ground has hosted Test Matches in recent years?br> The Riverside Stadium in Durham

Question 5: What lies between Trafalgar Square and Leicester Square on a standard London Monopoly Board?
Fenchurch Street Station

I didn’t have any sources listed for this, I took inspiration from a few quiz books I was working through at the time. When I dig the books out again next, I will update this post.

This is the second round I put together as a backup quiz for a friend of mine. This round is another of the pub quiz staples, Geography. Sooner or later you will get a Geography round and it is bound to get a moan from some people around the room, but personally I enjoy them. As always, you can never please everybody. This is a relatively straightforward quiz with a local question thrown in for the fun of it. I would expect 4 out of 5 is a very do-able score for this round.

Question 2: Situated in Italy, what is Stromboli?
A Volcano

I didn’t list any sources for this round again, but it should be easy to discover. For Upper and Lower Dicker I just looked at a map, if you don’t happen to have a map of Sussex to hand, then Open Street Map should be able to help. 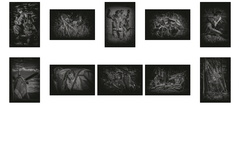