This is one of first quizzes I wrote for my old local many moons ago. While they were uncommon back then, themed quizzes have definitely become more popular since then, back then I decided to go for a themed quiz just because I could. The theme I chose was British Comedy, I included rounds on Stand Up comedy, Panel shows, Price Phillip, TV and Radio shows, and a picture round where you had to guess the characters name. Thankfully it was a big hit and I’ve not looked back since. Without further ado, here is the first round, to see the answers just hover over the hidden answer and it should appear.

Question 1: Question 1. Which British Stand up Comedian got into hot water in 2008 by describing British Olympic Swimmer Rebecca Adlington as “someone who’s looking at themselves in the back of a spoon”?
Frankie Boyle

Question 3: Question 3. Who turned to comedy after a divorce in 2004, using material from their failed marriage as part of their act. They went on to win the 2008 Edinburgh Festival Fringe Best Newcomer award in 2008?
Sarah Millican

Question 4: Question 4. Which popular stand up comedian has gone on to become an established actor with roles in Hollywood films such as “The Fifth Element” (1997), “Mouse Hunt” (1997) and “There’s something about Mary” (1998) among others?
Lee Evans

Unfortunately on this quiz I didn’t include any sources, but I’m sure if you do a bit of searching you will find the same ones. 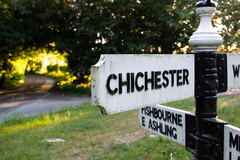 On a leafy country lane in West Sussex a black and white fingerpost road sign points to Chichester in one direction and to Fishbourne and East Ashling in another direction.