This is the longest round in the quick quiz I put together, and perhaps it shouldn’t have gone into a quick quiz as it caused a lot of discussions in the teams and overall it took the same time as a couple of rounds. I called it a Points Builder round, as every question has a lot of answers to help the teams collect as many points as possible.

Unlike my Inflation rounds where the teams know how many answers there are I left it ambiguous in this round which did lead to some teams wildly overestimating the number of answers available. You might want to add a rule to take points away for more answers, I didn’t bother as it was a friendly quiz. Without any further ado, good luck!

Question 1: Name all the European Countries (not dependencies) with a cross on its flag.
Iceland, Norway, Finland, Sweden, Denmark, United Kingdom, Switzerland, Malta, Greece, Georgia, Slovakia, Serbia (you could also include Vatican city as it has keys crossed on it’s flag, depending on how generous you are feeling)

I don’t have any sources for the answers on this one, but for the last one I’m sure I used the National Rail Enquiries website which had a table somewhere with the stations listed.

This is the third round for the backup quiz I wrote for a friend. This round was a little unusual in that I had an idea for a round but couldn’t get it to fall together in a way I liked, so instead I wrote a quick last minute round which just went along the theme of “The World’s Biggest” things. See how you do at it.

Question 2: The World’s Largest mine is used to mine Lignite (or brown coal) and covers an area of over 182 miles, but where in the world is it?
Germany

Question 5: By definition a Satellite is an object which revolves around another object, what is Earth’s largest satellite?
The Moon

The only sources for the round which I made a note of are the following ones:

For this round I decided to go for a slightly different round to see how it went. I plumped for a fill in the blanks round to let people’s imagination run wild. In my experience whenever a team has no idea what the answer is, not even a vague one, they will put the most ridiculous answer down just to entertain themselves. So I decided to use this to see what the most ridiculous answers were I could get out of the teams, I was pleasantly surprised with the varieties in the answers! As I said this round was fill in the blanks, but I went for a particular theme. Prince Philip. I thought that his quotes would fit very well in a British Comedy quiz, and I was validated when it got a lot of laughs!

Question 1: On finding out that Cate Blanchett was in the film Industry, what did Prince Philip ask her to fix in 2008?
His DVD Player

Question 2: At A Dinner Party in 2004 he opened the meal with this phrase; “Bugger the table plan, give me *Blank*!”
*My Dinner*

Question 3: In 2000 he said “People think there’s a rigid class system here, but dukes have even been known to marry chorus girls. Some have even married *Blank*!”
*Americans*, It was only when I was reading out the answers when I realised that one of our Locals had brought his American wife along to the quiz that night. Fortunately she saw the funny side!

Question 4: At a visit to Salford in 2001, 13 year old Andrew Adams told Prince Philip he wanted to go to space. Prince Philip’s reply was “You’re too *Blank* to be an Astronaut.”
*Fat*

Question 5: In 1998 he met a British Backpacker who had trekked through Papua New Guinea and said “You managed not to get *Blank* then?”
Eaten

Sorry, I didn’t make a note of my sources for this. A quick search shows that lots, and lots of newspapers reported on these quotes though! 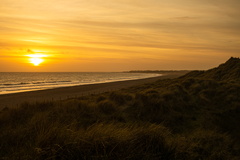 The Sun sets into the sea off the Sussex Coast at Littlehampton as viewed from the Sand Dunes on West Beach.