This next round of my British Comedy Quiz focused on TV Shows, of course there have been many TV shows from every decade of TV to choose from, but knowing the audience in the pub I went for TV shows I had heard discussed in the pub and which I knew were popular. One of the key things about this round is that there is a trick question in there somewhere, all of the quizzes which the regular quiz master would write would open with the line.

In tonight’s quiz there may be one more or fewer trick questions, you don’t get any extra points for spotting it, but you don’t loose a point if you get it right.

Often there were no trick questions at all and it was just chucked in to put you off your stride and make you second guess everything. So as the regular quiz master was taking part in the quiz this week, I thought I would give him a chance to have a go at my trick question. I can’t remember any more if he fell for it, but many people did!

Question 2: In Blackadder the Third, Blackadder (played by Rowan Atkinson) tries to convince his mad Scottish cousin MacAdder to take his place in a Duel with the Duke of Wellington (played by Stephen Fry) but who played the Mad Scotsman MacAdder?
Rowan Atkinson. Yes, this was the trick question!

Question 3: The cast of which show took part in University Challenge as Scumbag College? In an episode which involved racing to catch a train accompanied by The Ace of Spades by Motorhead.
The Young Ones

Question 4: In the famous Two Ronnies sketch, Ronnie Corbett keeps handing over candles but what was Ronnie Barker trying to buy?
Fork Handles

Question 5: What is the proper name for the piece of music used for Monty Python’s Flying circus as the theme tune?
The Liberty Bell (a March by John Philip Souza)

Sorry, no sources for this round either. 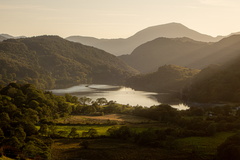 An evening view in Snowdownia where the sun setting behind Mount Snowdon causes shafts of light to illuminate the valley around llyn Gwynant near Beddgelert.