This is the third round for the backup quiz I wrote for a friend. This round was a little unusual in that I had an idea for a round but couldn’t get it to fall together in a way I liked, so instead I wrote a quick last minute round which just went along the theme of “The World’s Biggest” things. See how you do at it.

Question 2: The World’s Largest mine is used to mine Lignite (or brown coal) and covers an area of over 182 miles, but where in the world is it?
Germany

Question 5: By definition a Satellite is an object which revolves around another object, what is Earth’s largest satellite?
The Moon

The only sources for the round which I made a note of are the following ones: 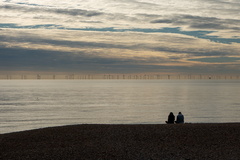 A couple sits on Brighton beach looking out at the Rampion Wind Farm which sits off of the Sussex Coast just south of Brighton. This view on a calm day shows the wind farm with clouds drifiting overhead.